Some months ago at our Annual Sales Conference, M&T Resources engaged in a process of reflection, self-assessment and transformation. We strongly believe in the importance of company values in relation to employee engagement, company culture and the services we deliver to our clients and candidates. Our company RESPECT values had been in place since 2004, and remained at the heart of everything it meant to be an M&T employee. 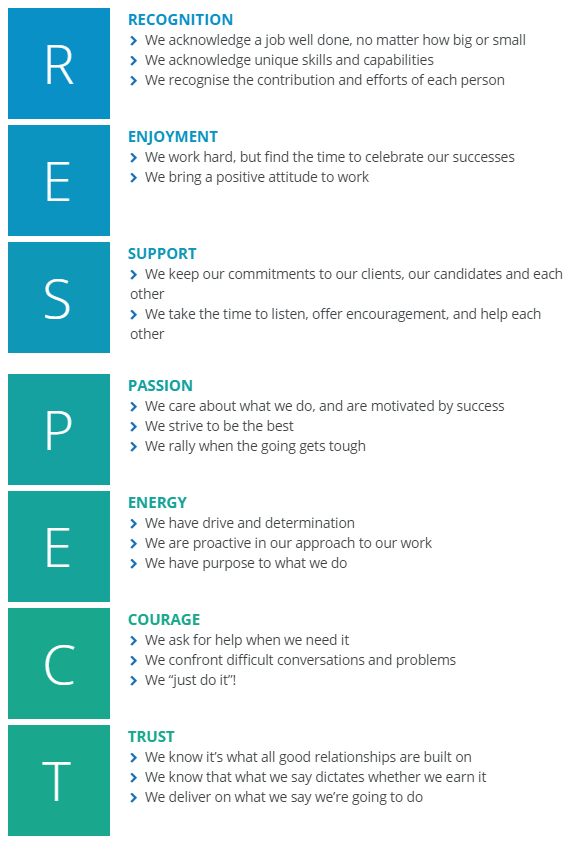 Twelve years on and with a much expanded team, we wanted to ensure our core values remained meaningful to our employees, guiding their behaviours and best practice, both in their personal and professional interactions.

The Sales Conference was the perfect opportunity to collaborate as a unified national team, reflecting on whether the RESPECT values really aligned with the present M&T approach, attitude and environment. Facilitated by Shaun Kenny, co-founder of People of Influence, the team was involved in two days of team-building activities and workshops where we worked hard to evolve our company values.

“Back in 2004, the group (no more than 16) was sat outside having a fireside chat when we came up with the RESPECT values. We wrote a dream on a piece of paper that was then put into a balloon which was released into the clear blue sky…fast forward to 2016 and this [was] serious stuff coupled with getting 44 people all to agree on a smaller of number of VALUES, ones that the staff will be measured on and we will all live and breathe from this day forward.” – Chris Sandham, Managing Director, M&T Resources

Our first day of reflection took place at the Coral Reef; a beautiful (if a little rocky) backdrop to the productivity of the day. Prior to the session, members of the team had spent time researching and collating the values of both Australian and international companies across a wide range of industries and sizes. Both in groups and individually, we reviewed the mission and value statements, noting down first impressions and analysing our reactions to them. Ideas were shared through facilitated small and large group discussions. The team outlined what they considered to be the most successful traits of a company values statement – from a format, style and content perspective. These would later inform the criteria for the redevelopment of our own company values. 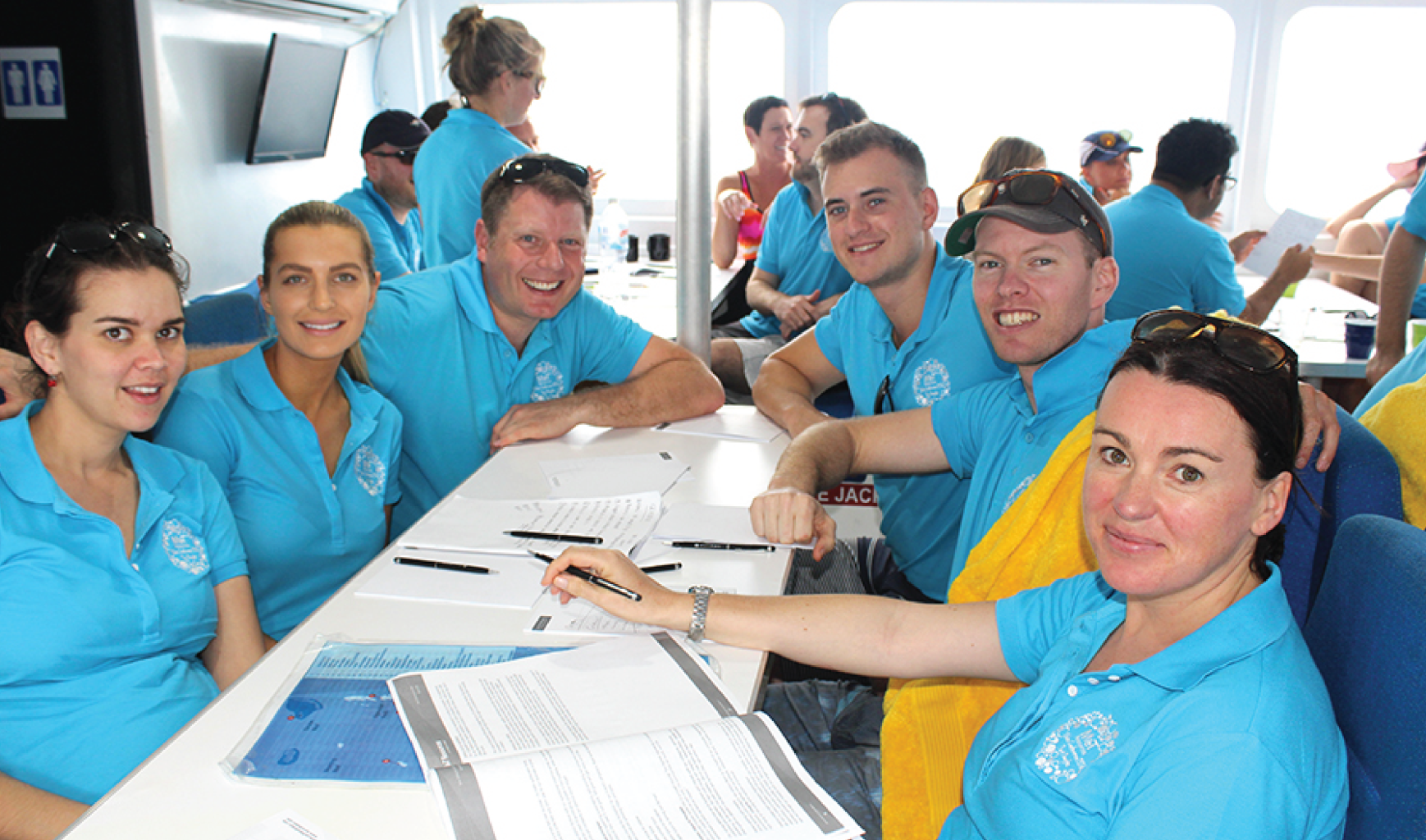 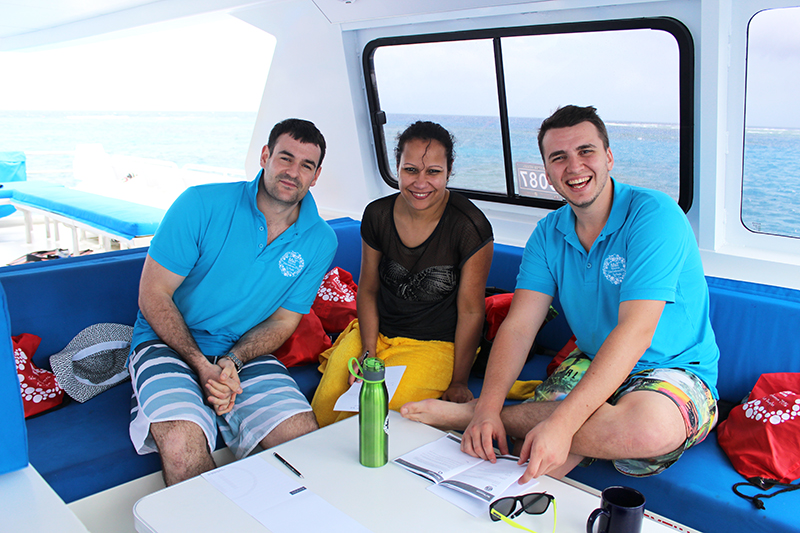 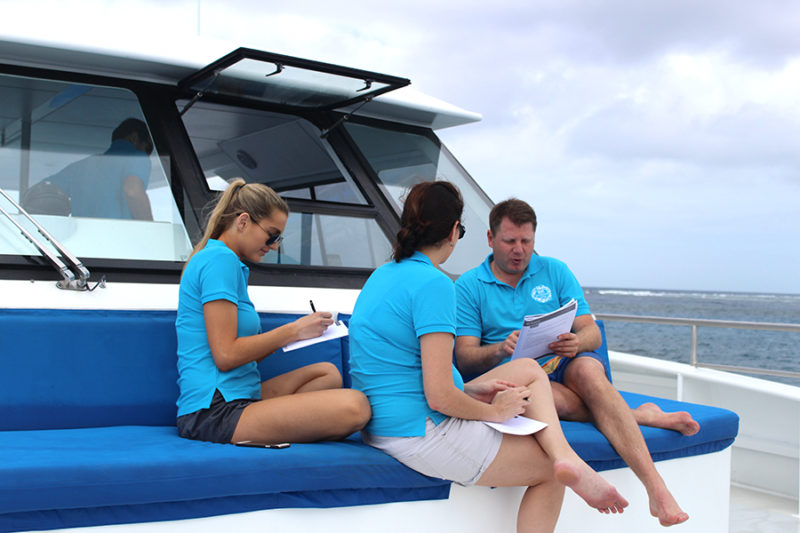 Building upon the progress made on the previous day, the team took to the conference room for an intensive series of collaboration activities. Colleagues from all states took a close look at the existing company RESPECT values, measuring them up against those successful criteria we had defined in the day prior. The intention was to consider the current relevance of our company values, redefining as required to ensure they remained meaningful to the full team.

In the weeks preceding the Sales Conference, the teams in each state had been given a brief to develop a video based on what they thought it made M&T special and unique. A video had also been produced containing client and candidate interviews, to gain feedback highlighting what we did well and could improve upon as a company. The team reflected on the perspectives showcased within the videos, which served as inspiration for the activities to come. 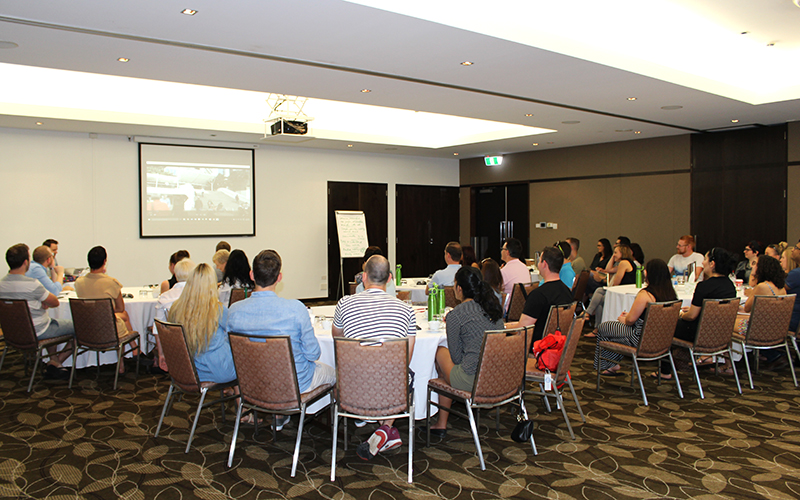 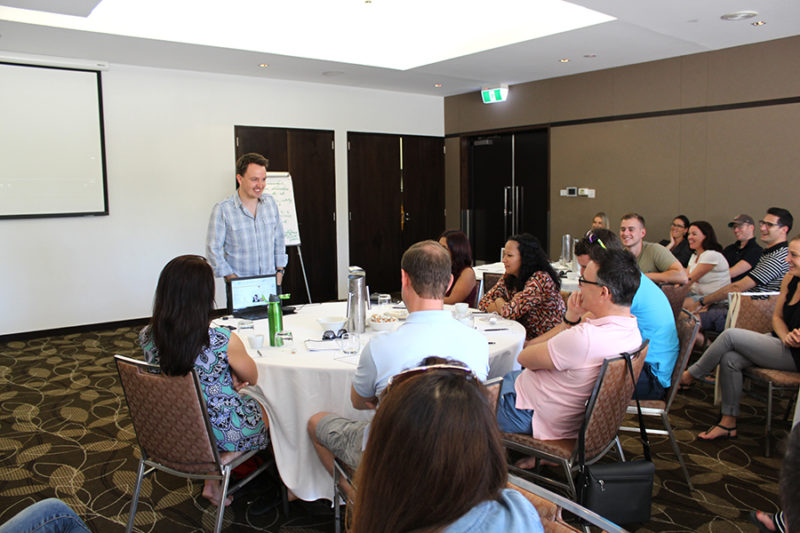 Armed with colourful post-it notes and a flip chart the team split into smaller groups to brainstorm what they believed to be at the heart of M&T Resources. They pinpointed the themes that they felt should play a role within our company values. 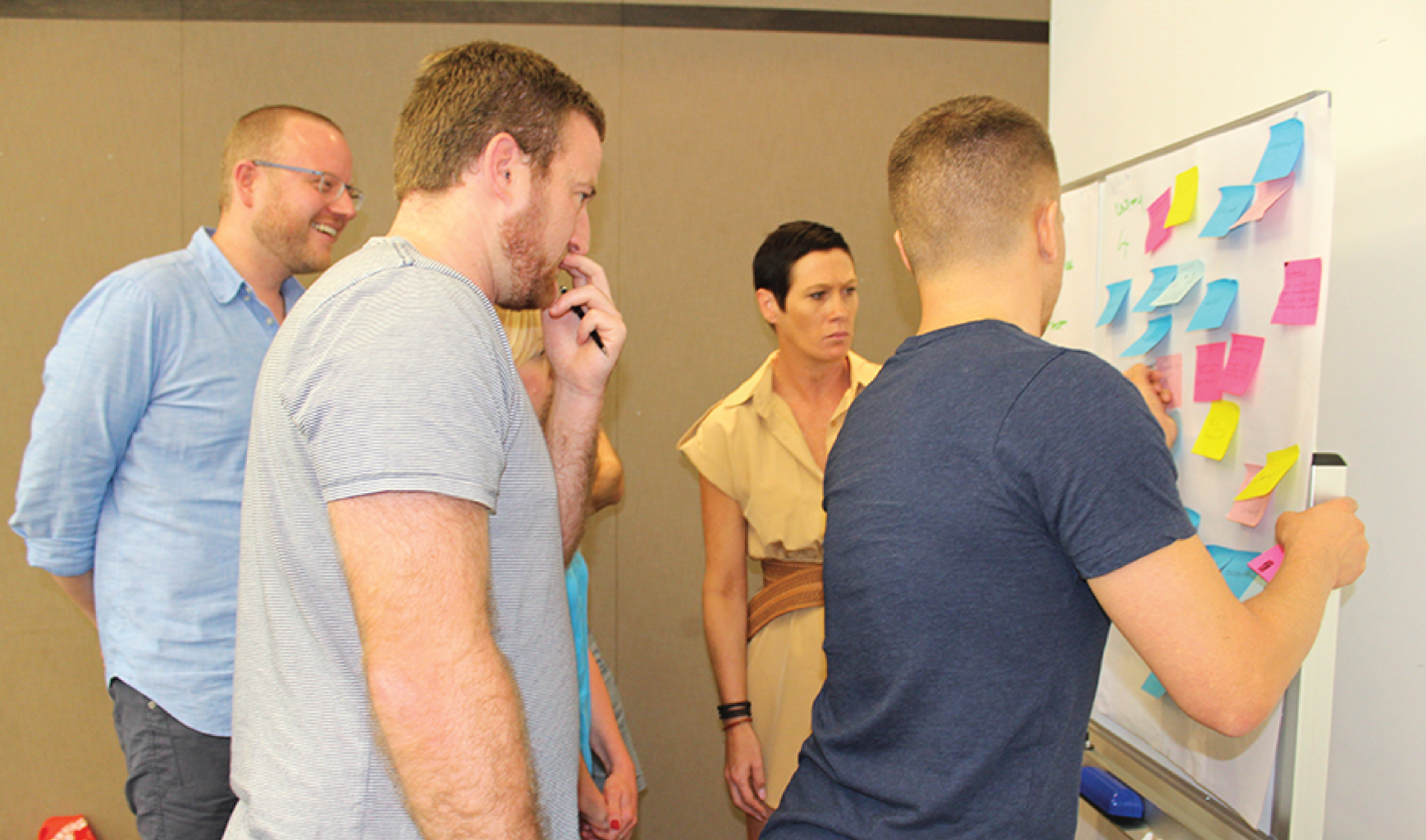 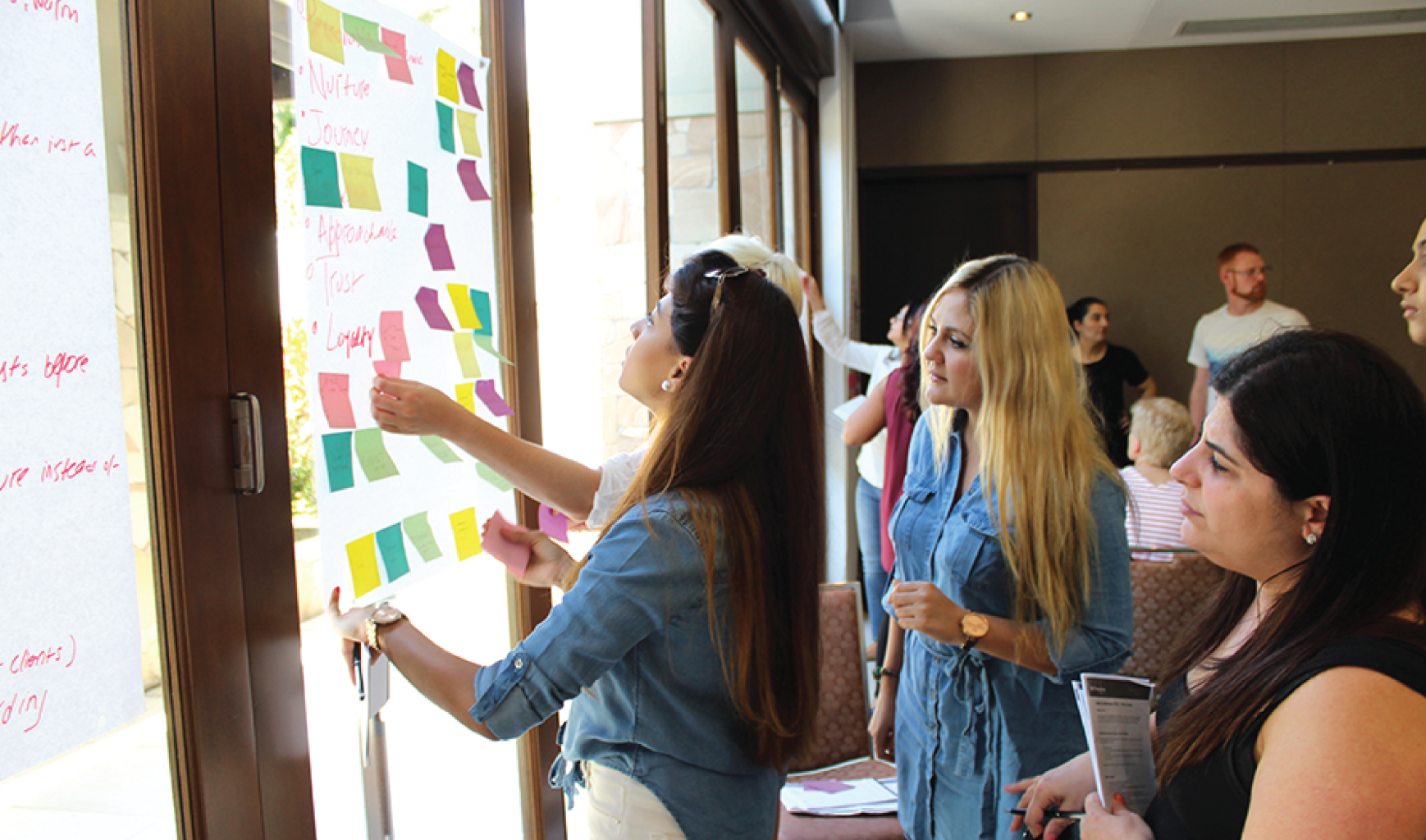 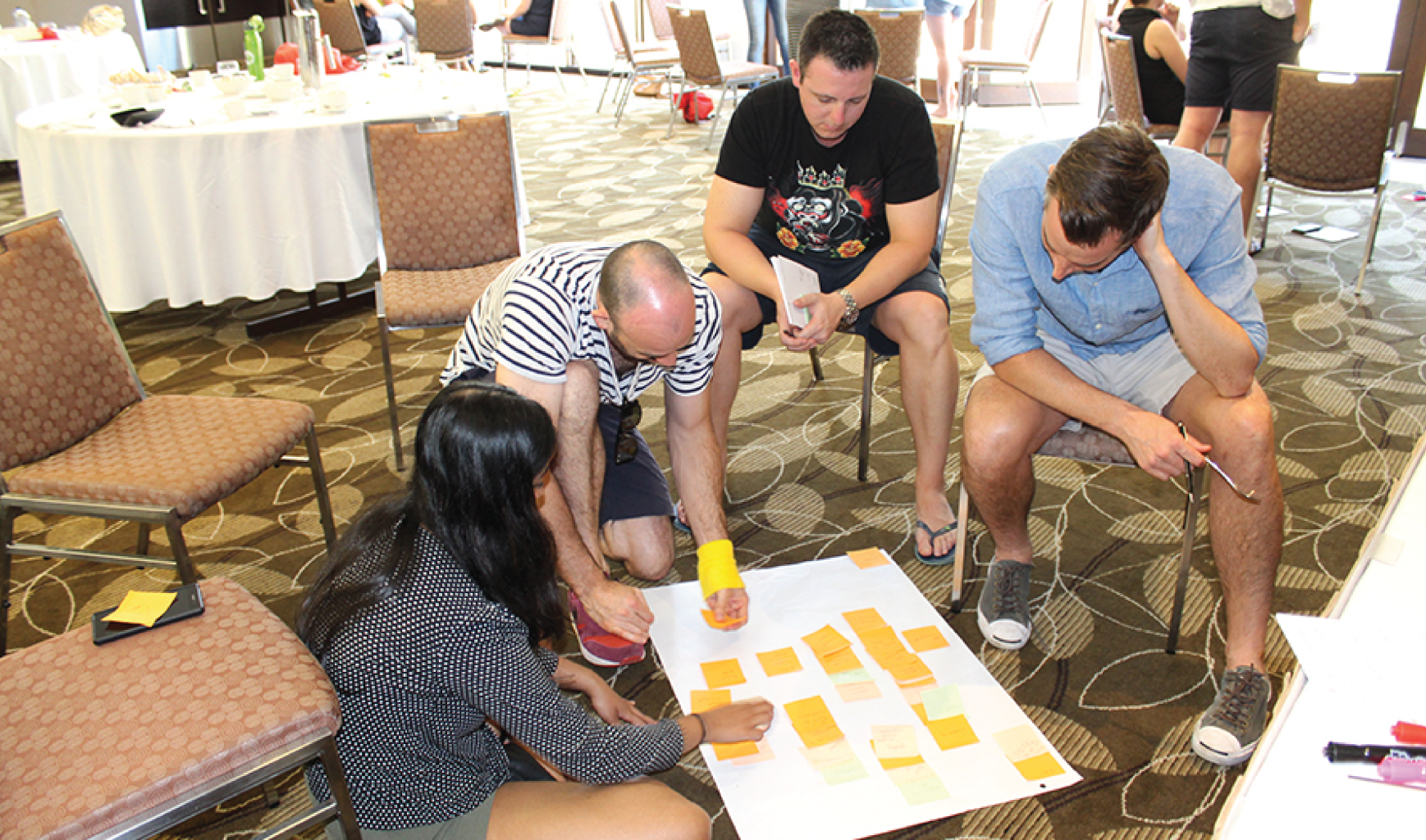 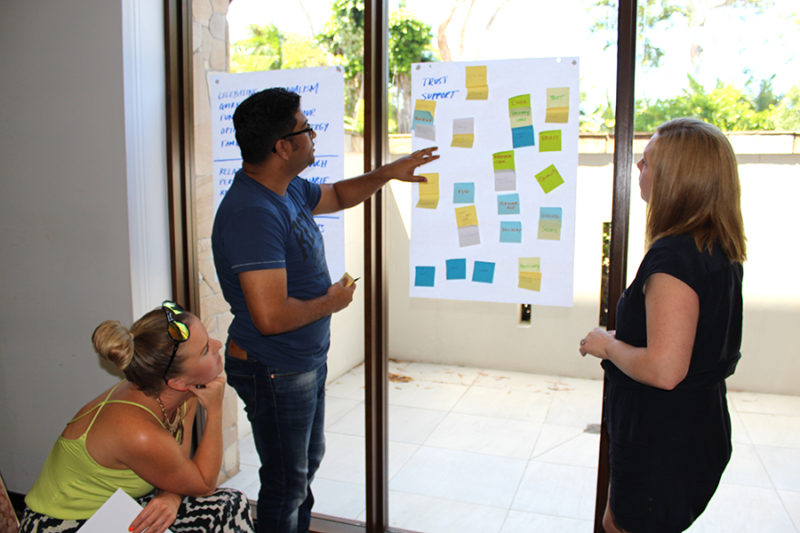 Following this, we came back together as a full group and looked for thematic commonalities between the ideas the groups had produced. The results revealed an evolution from the existing RESPECT values, and a great deal of crossover between the contributions of the different groups.

Noting the similarities, the related themes were gathered together and each theme placed in a different section of the window. Everyone was invited to individually review and vote on those which most resonated with them. Themes with the lowest number of votes were then set aside. The process was repeated a number of times, allowing us to narrow down to the five distinctive themes that the team felt were most meaningful… quality, relationships, teamwork, diversity and fun. 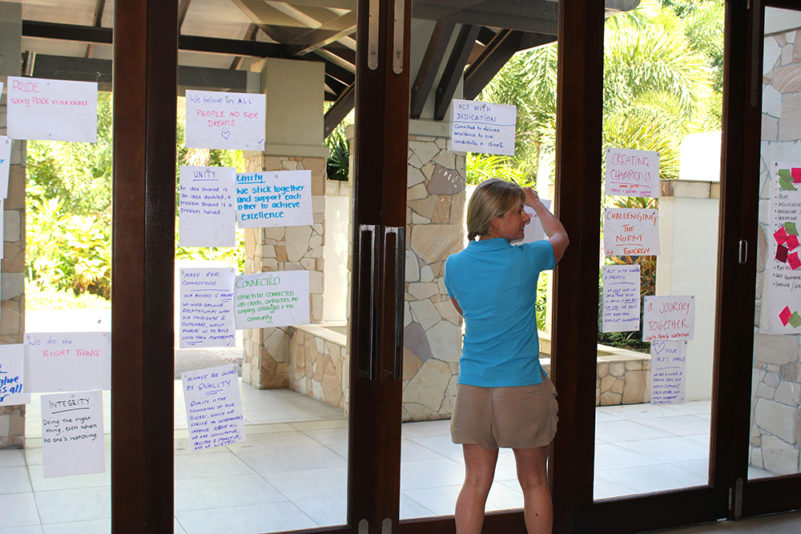 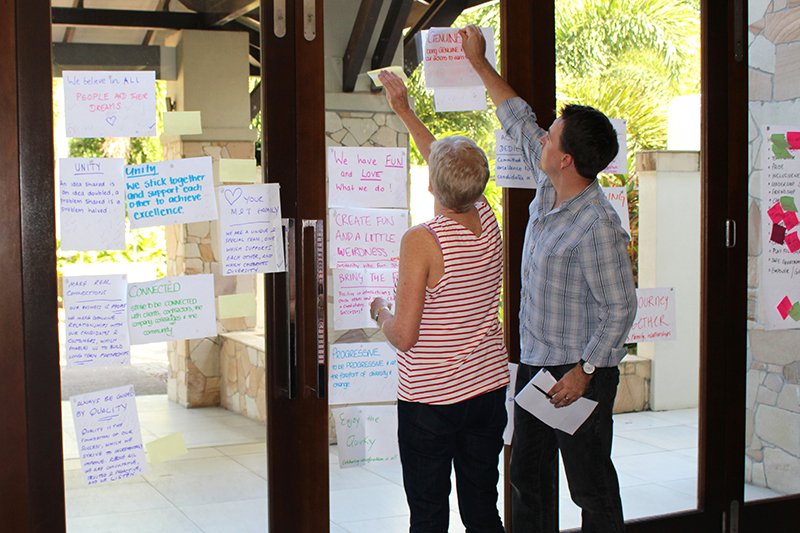 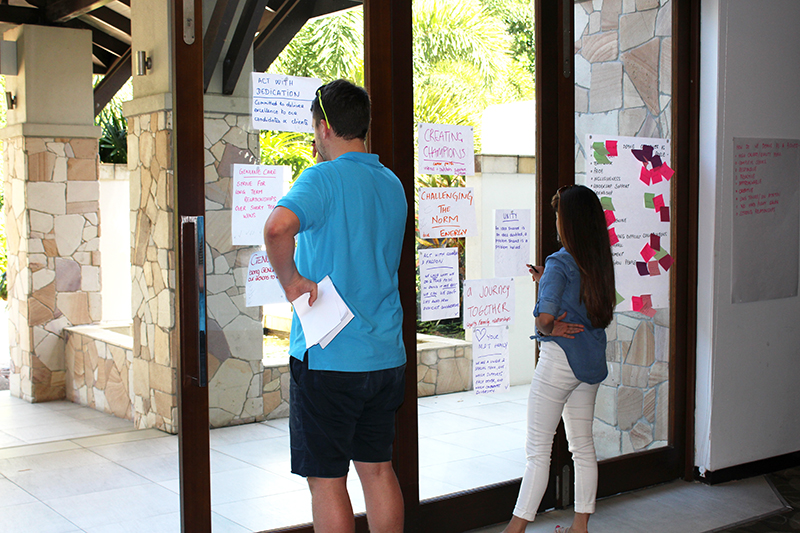 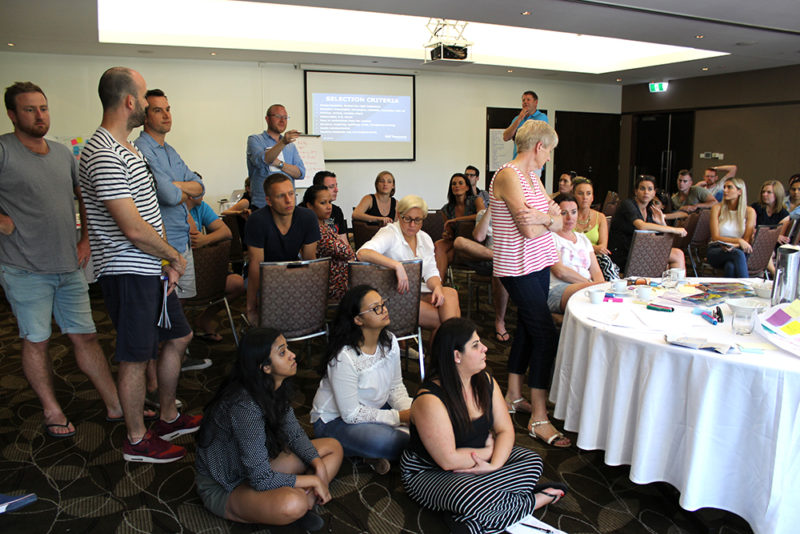 Five small working groups were then created – one per theme. Individuals were able to select which theme they would prefer to work on. Through a long (and challenging!) process of collaborative brainstorming, the teams each produced a single Value, in the agreed format and based on their selected theme.

Ideas were presented to and refined by the wider team, until consensus was achieved on each of the five values. 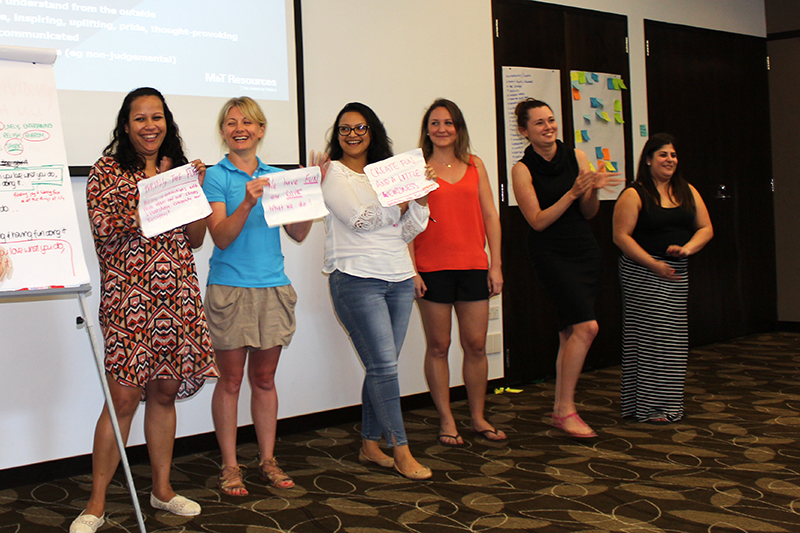 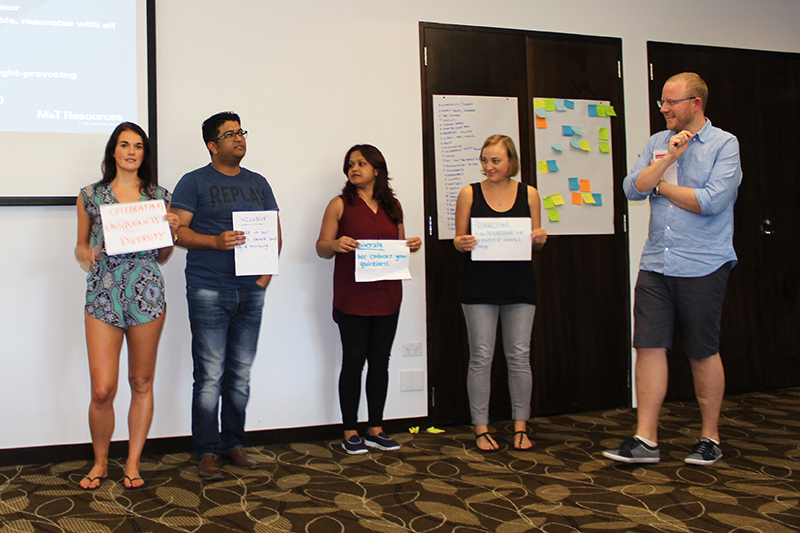 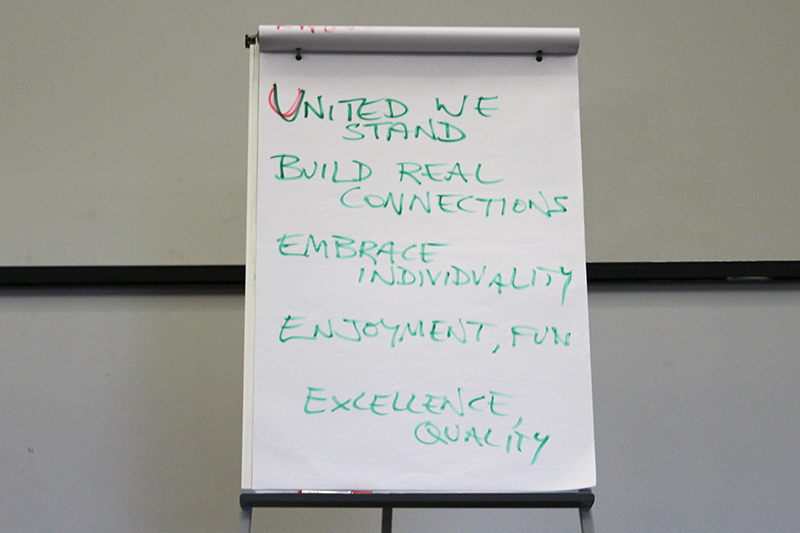 We are pleased to reveal the new M&T Resources Values, which will underpin our business every day, and will be a key part of the criteria by which the M&T team are hired and measured in terms of performance and adherence to the M&T culture. 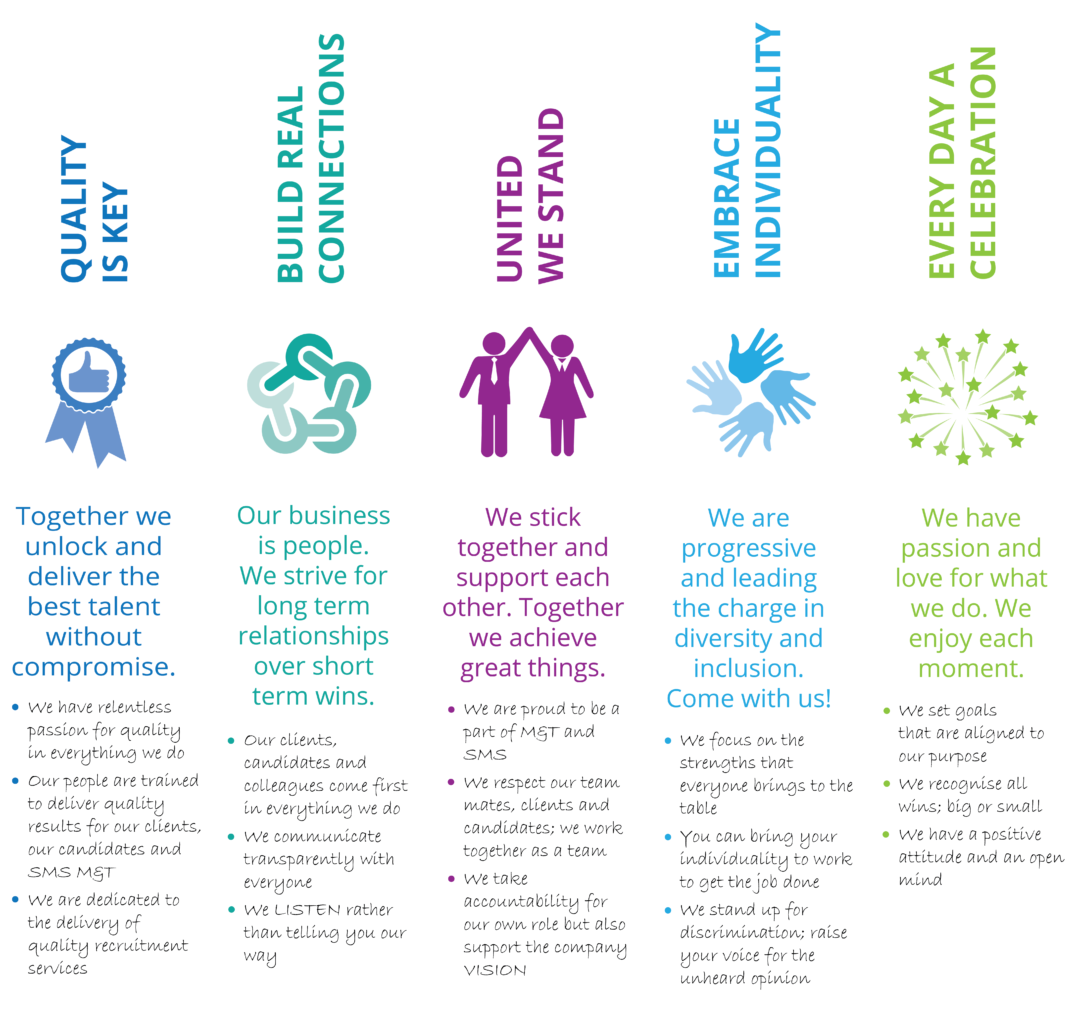 Council Connections: Spotlight on the City of Casey

For our third event in the Council Connections series we held a Spotlight Session at the City of Casey to showcase the new Civic & Arts Centre, Bunjil Place. The way local government needs to operate is quickly evolving, and the City of Casey has taken on the challenge to adapt. With a cost of […]

Work towards your professional goals – be the best you!

Understanding aspirations and achieving them in 2017 and beyond As we enter a new year, we are surrounded by messages encouraging us to turn over a new leaf, to set goals for the New Year and work towards self-improvement. At M&T Resources we believe that everyone should have the opportunity to achieve success. We believe in the merit […]